Australian Broadcasting Media (ABM) is currently offering artists an opportunity to get themselves and their music some commercial radio airplay on our FM Radio Stations as well as our Internet/ Iphone & Nokia apps with our Paid Ad Campaign.
ABM now have 32 FM Radio Stations throughout NSW & VIC, we also have 28 Internet Radio Stations + Iphone & Nokia Radio Station apps covering genres from country, indie, pop and dance.
The Paid Ad Campaign offers great value; $550 ($500+gst)  would get a single/release played 300 times over 1 month, i.e.10 times a day for 30 days.

Example :- the bands/musicians/artists song would be introduced as a paid ad, at around the middle of the track the band/musician/artist would be faded in to give the listeners a little info about themselves, their website etc and where the track can be purchased before being faded out for the completion of the song

We feel this is tremendous coverage  and will be off great value to your members, we also have the same great ad rates for up and coming events/artists. Please email andy@zfmcountrywide.com  for more info or call Andy on 0405900486.

A warm invitation to attend the concerts below with this wonderful British String Quartet. 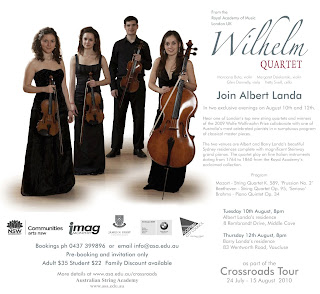 Posted by simplywilde at 07:06 No comments:

Welcome to my new blog.. gee what am I going to write.. well I guess I am writing.
Posted by simplywilde at 17:47 No comments: